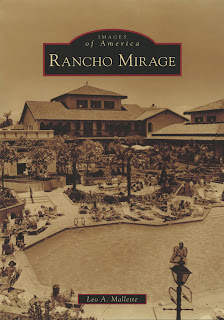 Eva Slater's drawing of the San Jacinto Mountains has been included in this book on Rancho Mirage, a resort community near Palm Springs. The author is Leo Mallette.
Posted by Miriam Slater Art and Life Blog at 9:35 PM No comments:

Harry Carmean and Miriam Slater, both artists, live in Santa Barbara and enjoy the benefits of his and hers studio spaces. Oil paintings, water colors, illustration, and even teaching workshops — these two have found wonderful bright airy spaces to create their artwork.

My interest in sharing these dual spaces was to show how different artists organize and decorate their spaces. They are eclectic, roomy, drenched in natural light and decorated with minimal distraction. There is nice collection of books, art materials, and international collectables; I just love how bohemian and warm the setting is.

I sat down with Miriam and Harry to find out more about their artistic retreats:

1. What mediums do you practice and what did you design your artist studios for specifically?

My studio – I work in acrylics and oil paints, painting objects as well as canvases. Harry’s drawing room is in Santa Barbara – in this room he only works on smaller sized art - watercolors, drawings and wax sculptures.
Harry’s large studio in Acton – in this studio he works on oil paintings of all sizes. He also uses it for figure-drawing workshops (black and white photo).

2. What inspired the style of the studios?
When creating this studio, I wanted for the originally dark and dingy room to feel,light and airy despite its small space (12’ x 13’). Thiswas achieved by vaulting the ceilings and putting in a french doors. The window along the side was removed so I had a wall to hang art. Along with my own pieces, I like to surround myself with inspiring things such as an old Tibetan wheel of life painting, a Japanese wood block print and a painting by Harry Carmean. I wanted it to be very simple with white walls and let the art be the focus of attention. Since I work relatively small, I do not need a grand space, rather my goal was to create a cozy, cheerful place to work and that I could fill up lots of art.

The style of Harry’s “drawing” room a follows traditional Santa Barbara look. The room has a rubbed pale yellow finish and traditional palette (pale yellow, olive green). In this space, Harry surrounded himself with inspiring art by other masters as well as his own work. His art library is close at hand for reference. It is in this room that Harry works specifically on drawings and small wax sculptures seen on the table in front. (The playing card chairs are by wife Miriam Slater.)

Harry’s studio in Acton was designed to be his dream workspace. He built the entire structure by hand, from start to finish, beginning in the middle 1980’s and completing it in the early 1990’s. It was designed by architect Jocelyn McKay, to Harry’s specifications. The main room is very large, so that he could work on multiple large canvases at once. Harry likes to have controlled light so the only substantial windows in the room are those that face north. Harry purposefully put in only a few windows so he can focus entirely on his art. The design of the space is spare and with a modern feeling to it, so as to display the artwork without any distractions.

3.Has having a separate designated studio for each of you, impacted your work at all?
We enjoy having separate studios for several reasons. One is purely technical, that is, we can control the lighting in each space according to of our individual tastes (Harry likes controlled lighting, with most of the studio dark with a single spot light, whereas I like a room flooded with natural light). Separate studios also allow us to each go into our own worlds without interruption, which is very important because creativity for us involves a fair amount of introspection. Also, we both have so much work that we can’t fit everything into one studio!

Thanks for sharing with us Miriam and Harry!

Posted by Miriam Slater Art and Life Blog at 8:29 AM No comments: 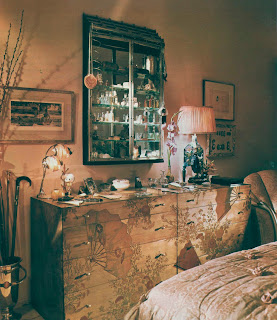 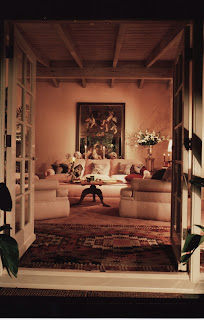 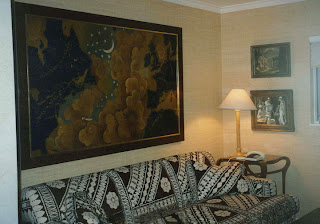 Artists Harry Carmean and Miriam Slater's work can often be seen integrated into the designs of noted interior designer Jarrett Hedborg. Hedborg whose work can be seen in Architectural Digest, House and Garden Magazine, Vogue and Town and Country magazine or books such as The Los Angeles House by Time Street-Porter, is globally known for his expressive and innovative interiors. The top two photos show Angelica Huston's home with a silver leaf Japanese style bureau by Slater. Hedborg has designed homes for a number of celebrities including Jim Carrey, Jack Nicholson, Quincy Jones, Joni Mitchell, Michelle Phillips and Bette Midler.
Posted by Miriam Slater Art and Life Blog at 2:11 PM No comments: